It Began with Coffee…

One of Alton Brown’s current Truths About Food is, “The most important kitchen tool is the kitchen table. Food connects people and that doesn’t happen unless there’s a table.”

Whether that kitchen is in your home or in a Michelin-starred restaurant, I believe this to be absolutely true. How else can you explain a pure dive holding as much if not more emotional connection than a fancy restaurant on the waterfront?

Food and company define our experiences and etch them indelibly in our minds. That’s not to say you cannot enjoy eating alone–I’ve been a table for one more than a few times–but it’ll take more to make it memorable.

This is the path and philosophy I follow. Create great experiences. Bring people together. Enjoy each other as we nourish our bodies and our passions. 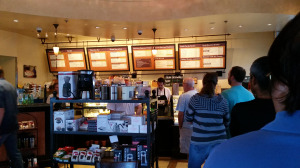 In line at Kean Coffee

This site that you see before you was born on Labour Day, on a long weekend where I was determined not to spend 72 hours glued to the computer slaying digital dragons.

I had recently viewed an interview with Martin Diedrich at Noah University--a mentorship programme designed to overhaul your career, craft, and calling–and was inspired to create a creative date at his coffeehouse, Kéan Coffee.

Bright and early, we met, and we were graced with the presence of Noah, himself. To put it simply, I’d never been so inspired in my life. I walked away that morning so fired up, I actually walked into a Barnes & Noble to buy a book because I needed right now. I’m an avid Amazon Prime member; my life revolves around free, 2-day shipping.

In the months that followed, there were more books, a lot of talking, graphic designers, WordPress, themes, and a lot of eating. When it came time to write the first post, it was clear where I had to start.

It began with coffee…

Kéan Coffee in Tustin, CA, is a bright and friendly coffeehouse, riding the end unit in a large strip mall with plenty of parking. I’d be curious to see what it’s like here when it’s dark, but for a fresh new beginning to a day, it felt ideal.

One of those things you just get a feel for and can’t really describe with pinpoint with some physical feature is the vibe and Kéan exudes a welcoming embrace that seems to encourage people to find themselves and express it.

Immediately to the right as you enter is a coffee roaster, which immediately gave me fond memories of fire trucks. Kéan roasts their coffee in-house and promises that none of their grinds stay on the shelf for more than five days before they are used.

I have no idea where their pastries come from, but they claim that they are sourced from local artisan bakeries. As far as I know, it’s not like there’s a certifying authority going around regulating the term “artisan,” so who really knows if it’s just hype?

I’ll say this, though… the spinach quiche I got was delicious. The blend of cheeses and spinach were just right to be none too salty with a pleasingly springy texture. The pastry shell was, perhaps, a little heavier than I would have liked, but I may be unfairly comparing it to the light shells I’m used to with Macau style egg tarts.

The centerpiece, though, has to be the first thing on the list of House Specialties on the board behind the counter. The Turkish Latte with Cardamom was a work of art, both visually and rolling over my tongue. I’ll admit that I don’t have a whole lot of experience with coffee that didn’t come in paper cups, so I was thrilled to get latte art that I’d previously only seen as pictures on the Internet. 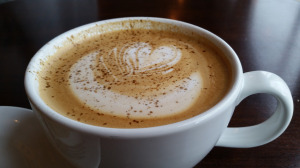 Unfortunately, all I can give you is a picture on the Internet.

If you were with me, though, you’d have been able to experience the rich aromas coming off the cup, accented with the cardamom. So, too, would you have felt the delicately foamy milk brushing your lip as you took a sip of the creamy espresso.

I’m not going to lie: my previous favourite coffee was a demi-tasse of Armenian coffee made by my officemate. It was a flavourful punch in the face that shocked you into alertness and left a little grit on your teeth to remind you that life is simultaneously sweet and bitter, and you can’t have one without the other.

Kéan’s Turkish Latte with Cardomom, however, brings no imagery of squalid prisons or Middle East freedom fighting. Instead, the best words I can find to describe it–which I’m sure are non-technical terms for the coffee aficionados–are tender and cuddly.

If you’re looking for a great cup of coffee, fun latte art, or you just may be looking for a space that attracts people creating big things, you can’t go wrong by paying Kéan Coffee a visit.

Year of the Ram
comments
Leave a reply »